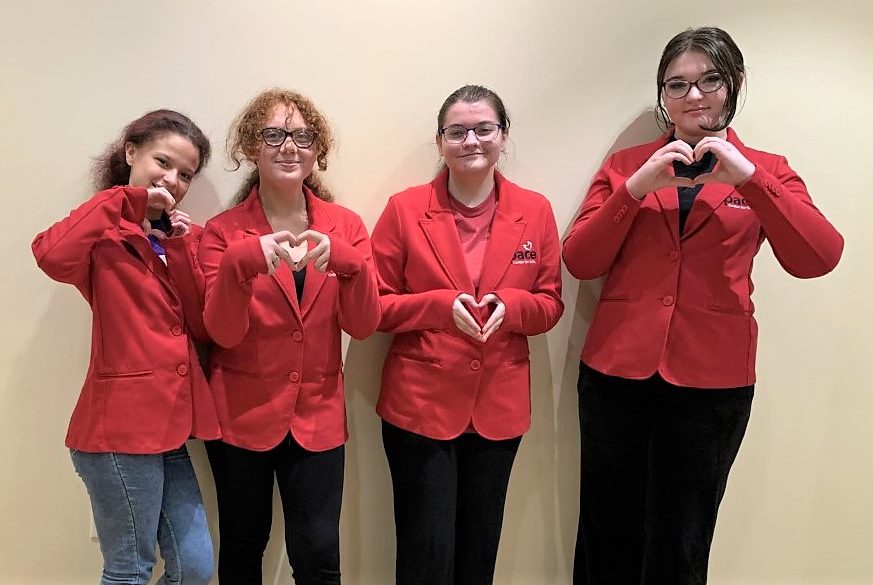 Sophia, Alyssa, Katlyn and Olivia are part of the Girls Leadership Council (GLC) at Pace Broward. As November is the month of midterm elections and voting, the girls connected to discuss the importance of civic engagement.

Before finding Pace, Sophie was dealing with self-confidence issues and struggling with attending school “I used to be like a turtle. They go in their shell all the time and they get scared, that was me,” she said. After finding Pace, Sophia became more passionate about education, and in the future, she plans on joining the Air Force, since her grandfather was a Marine.

Alyssa found out about Pace through the Reach program. “I’ve been able to get the credits that I need,” she said. “The teachers are really helpful, and they don’t make me feel uncomfortable with asking for help at any moment.”

Olivia was struggling with focusing in school and completing her homework. After she found out about Pace through her therapist, she came to Broward, and her ability to complete her assignments improved dramatically.

Katlyn found out about Pace through family and friends as she was looking for a space to help improve her mental health. In the future, Katlyn sees herself becoming a theater actress.

As members of the GLC, the girls practice advocating and finding their voice within the safe walls of their classrooms. They inspire change, mentor younger and/or new girls, engage with public officials to share their stories and promote the needs of all girls.

“I can advocate for the girls in a way that the staff can’t,” Sophia said. “I can help bring concerns up and provide staff with more understanding.”

“I feel like our role is to set a good example for the other girls,” Alyssa said.

One example of the members of the GLC sharing their concerns is when Katlyn was invited to a homecoming from a different school and a few of the girls came together to sign a petition requesting a homecoming for Broward. They shared the petition with staff, and it is currently in review.

“We’re just trying to get things to help the girls see that Pace is an amazing place,” Katlyn said.

Another example of the members advocating for change involved Alyssa bringing attention to the city bus hours.

“A lot of us girls take the city bus. We needed to get out earlier in time for the bus. Certain girls would have to go home early only because they were making it home like six, seven o’clock at night because of where they were living at and all of that. Because I’m in the GLC, I was able to bring this issue to the attention of staff faster. When the bus schedules change, Ms. Orlane looked at the schedule and made sure there was a balance for us. Instead of getting out at 2:50 pm, we now get out at 2:42 pm.”

When the girls have a complaint, they set up a meeting with the staff to discuss their concerns and have an open and honest discussion of how to address them.

“It’s being a voice for the other girls when talking to the staff,” Olivia said. “I try and take everyone’s well-being into account when we have the meetings. I think about how this affects the other students.”

Some of the girls dealt with cyberbullying and to combat this issue, the members of the GLC came together to create a bully box, where girls can anonymously share their stories of bullying and harassment. This has helped to uplift girls’ voices and curb the issue of bullying dramatically.

In the coming months, the GLC at Pace Broward will elect a president, vice president, treasurer, and secretary. They will build a campaign and engage directly with the girls, encouraging them to vote for who they believe will serve each position best.

As the girls prepare for their own campaigns, they discussed the importance of civic engagement within their community.

“It’s important to have representation,” Sophia said. “It’s like a way to provide a set of rules within the community.”

“Voting is a right,” Alyssa said. “Everyone has the right to be heard and their opinions are to be listened to.”

“What I envision for women in the future is that people don’t see them as weak and people won’t see women below men,” Olivia said. “We should be seen as equals to them.”

“I want women to know that they can do anything that they put their mind to and they don’t have to stay hidden because a man or even another woman brings them down,” Katlyn said.

Are you a girl who’s interested in Pace? Know a girl who may benefit from our programs? Click here to learn more about life at Pace and how you can enroll.