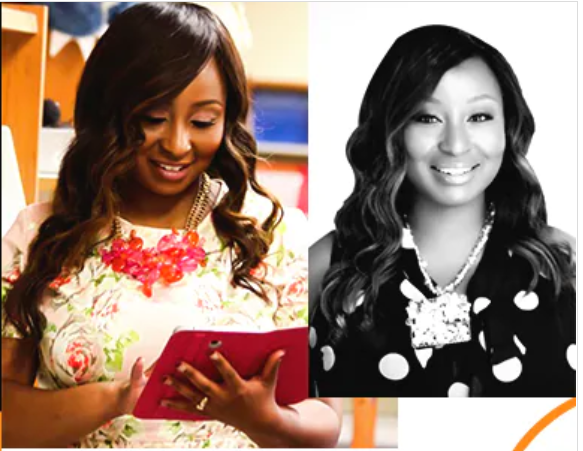 Johnson learned long ago just how important having mentors and role models is for children, especially teenagers who without those positive influencers can steer off track, get involved with the wrong crowd and lack the confidence they need to be successful.

Appreciative of the people in her own life who have supported her throughout her journey, it’s Johnson’s mission to be a shining light for kids and help them overcome obstacles and challenges. Going back to when she was a high school and college student to now as a community-leading professional, her activism has made a huge impact on many others.

“Mentorship is the ultimate key because we can’t do anything on our own, and if we think we can we’re very deceived,” she said. “The only way that we grow and learn is by someone teaching us. You see that with parents. They teach their children. Not only are they parenting, they are mentoring at the same time. The same thing happens with a teacher. When they are in that classroom when they really build relationships with their children, no matter their age, a point of it moves from teaching which is ‘I’m going to show you how to do something’ into mentoring which is ‘let me guide you along a path that you may not have already felt comfortable with but let me guide you and show you that you really can do that.’”

An energetic, innovative, and results-oriented executive leader passionate about building strong communities and improving the lives of girls, children, and those with disabilities, Johnson has worked in just about every realm of education and child development. She’s held faculty positions at Lansing Community College and Michigan State University developing curriculum and programs in the areas of child development, early childhood program administration, leadership and inclusion. She has also served as a program consultant with the University of Michigan, Orange County Public Schools, Scholastic Inc., and several other family and youth service organizations.

Since 2017, she has been the Executive Director at the Pace Center for Girls, which provides girls and young women an opportunity for a better future through education, counseling, training, and advocacy.

“Pace is a place for young ladies that are really looking to make some positive changes in their life,” Johnson said on The Ted Show a few months ago. “A lot of times I think when people have traditionally or previously heard of Pace, they think of us as a place for bad girls. What I like to tell people is that Pace is not a place for bad girls, Pace is a place for young ladies that have had bad things happen to them. We become that safe, nurturing place that I think we all need, but girls in that particular instance need that can help them regain their own confidence, their self-esteem and honestly the love within themselves.”

A published author and researcher in the child development field, Johnson was appointed by Florida Gov. Rick Scott to serve on the Valencia College Board of Trustees, ranked nationally as the top two-year college in the country.  Recently, she was named one of “10 People that Make Orlando a Better Place” by the Orlando Sentinel, featured as one of Orlando Family Magazine’s Super Women, and one of Orlando’s 2020 Women of the Year by Orange Appeal magazine and the African American Women’s History Month Project.

Johnson has had the opportunity to work with so many kids from all walks of life, many of whom have gone on to have incredible success in and out of the classroom. The turnarounds, witnessed firsthand by Johnson, make the experience that much more rewarding.

One of Pace’s youngest alumni is one of those many examples. She was just in middle school when she started at Pace. Early on, she was shy, withdrawn and in need of direction. Over time, with Johnson and others at Pace guiding her during her three years in the program, she made an incredible transformation.

“She developed a confidence that she didn’t have when I met her,” Johnson said. “She kept her head down. She didn’t speak to anyone. She would not build any relationships with anyone to now she has spoken in front of large government officials here in our state. She has had the ability to speak before our entire board of trustees, our CEO. She has introduced and spoken directly with senators and representatives and advocated for our center. The thing I am most proud of is that now that she’s gone back to her home high school, she is now a leader there and she is on her path to becoming a lawyer and an artist which is what in her heart. But it all started from her gaining her confidence while she was here at Pace.”

It’s those stories that warm Johnson’s heart. No matter how difficult things can be for someone, there’s always hope, and as Johnson has seen throughout her experience, with perseverance, resilience and confidence anything is attainable.

Recognized by the Orlando Business Journal as a Top 40 under 40 business leader, her career achievements include:

Developing and implementing successful corporate social engagement strategy leading to increased funding and strategic partnerships in excess of $2 million
Public policy advocacy for children's rights, community initiatives with local and state government officials
Successfully leading the transition of a 4,000-square foot facility to a purpose built and renovated 15,000-square foot facility for individuals with disabilities, garnering over $750,000 of community support
Gubernatorial appointment to the state of Michigan Early Education and Investment Committee
Although not in Florida at the time, as she’s from Michigan, Johnson vividly remembers when the Orlando Magic became an NBA franchise. A fan from afar, she had Magic t-shirts and jerseys and would cheer on the team while watching them play on television.

Being recognized by the team for the work she’s done in the Central Florida community is something she will cherish and appreciate forever.

“Who would have thought twenty years ago this same team that I was cheering on, they’re now cheering me on,” Johnson said. “I am beyond humbled. I am very grateful that you all would consider me for something like this.”

About the Program: As part of the Magic and Steve Clifford’s continuing efforts toward social justice reform, he created the Social Justice Game Changer program to honor one local leader who has made a difference in the realm of social justice issues. A cause close to his heart, Clifford is extremely active in programs that support equality and justice for all people in the Central Florida community.

Through this program, Clifford looks to put the spotlight on those continuously doing the hard work, day in and day out, fighting for sustainable change. As part of his program, one person is selected and honored each game. The honorees are given tickets, provided by Clifford, to the game and featured in-arena on the Magic Vision screen at center court.

“The purpose is to honor and to celebrate so many of the people in the Orlando community who are fighting for change and who commit their lives to making Orlando a better place,” Clifford said. “It’s just a way to celebrate them, what they stand for, and what they do for our community.”