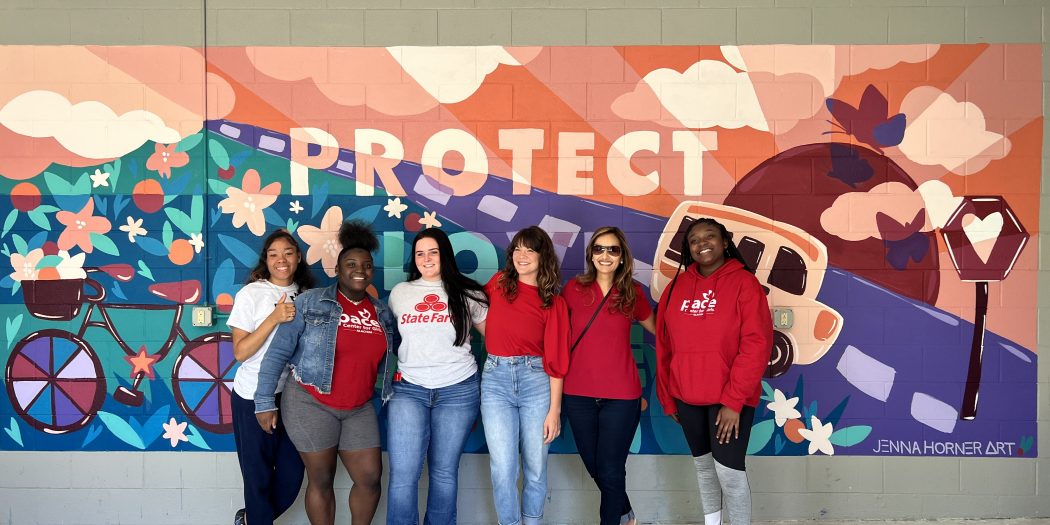 It was a joyous day for the Pace Center for Girls as they celebrated their end-of-the-year field day and the unveiling of their colorful new mural that reads "Protect. Love. Serve."

The key message to the girls: Be careful and cautious when driving, and don't text and drive.

Pace, a local education center for young girls in grades 6-12 located at 1010 S.E. 4th Ave. in Gainesville, partnered with local muralist Jenna Horner to create an art installation. Its purpose was to advocate for a safe and stronger community as it applies to driving safely on the roads.

"It was a really great opportunity to just get to know these girls and teach them different brushes and why we use them and about color mixing and then have them actually get their own physical hand in there," said Horner, who added that the center holds a special place in her heart.

Horner began working on the mural Monday and finished the project up on Wednesday morning with the assistance of six students from the center.

One of the guest speakers Thursday was Tonya Williams, a Lakeland native, who shared with the girls about how her son, Durreill Williams, died in a car accident 16-years-ago due to someone texting and driving.

"It is just important and so necessary for them to just be mindful, be careful and watch out for others," Williams said. "You can't be in such a rush to get anywhere, there's nowhere in this world that's important enough to drive and not pay attention."

There were more than 48,000 distracted driving crashes in the state in 2020 — 75% were caused by the driver being inattentive behind the wheel, according to Florida Highway Safety and Motor Vehicles.

Alisha Mitchell, 15, was one of the Pace girls who volunteered to help paint the mural. She said she wants her peers and the next generation that comes after to not text and drive while driving and follow the message on the mural.

"Keep your eyes on the road, because it's always another person on the road too, so make sure you watch out for others and yourself to be safe," Mitchell said.